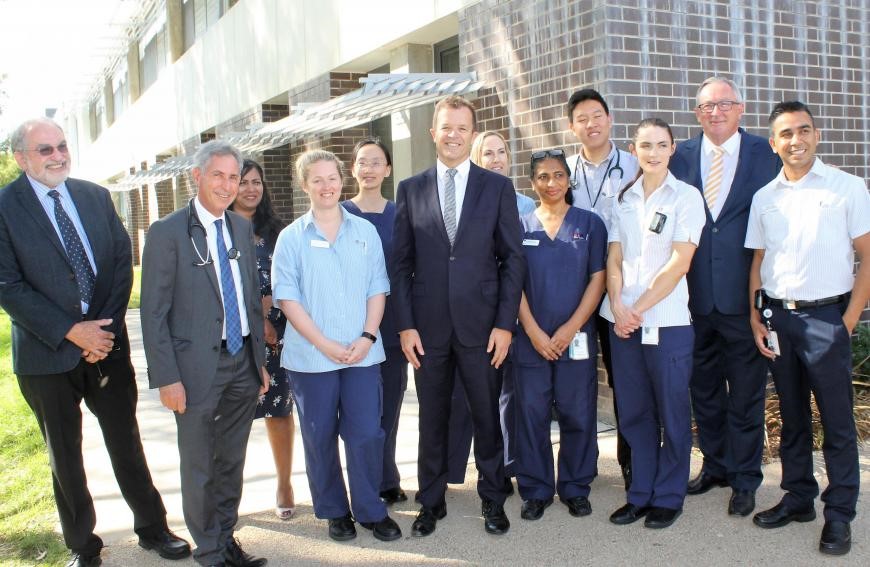 The significant investment will ensure the growing community of the Sutherland Shire can access world-class health services when they need them. It will make a huge difference for patients in the Sutherland Shire, who will be able to have their surgery quicker and closer to home.

The NSW Liberals & Nationals Government has a strong track record when it comes to delivering health infrastructure, having already built or upgraded more than 100 hospitals and other health facilities across the State.

This investment will greatly increase capacity for surgical treatment at Sutherland Hospital and create more than 800 jobs during construction.

In addition to the infrastructure, the NSW Government is delivering more nurses, midwives and doctors. Over the next four years our Local Health District will also receive at least 773 new staff including 116 doctors, 502 nurses and midwives, 96 allied health staff and 117 hospital support workers.

The new investment comes on top of $72 million already provided by the NSW Liberals & Nationals Government in Sutherland Hospital since 2014.

The results of that investment are there to see, with just about every patient having their elective surgery on time – 99.6 per cent compared with just 88.6 per cent under Labor.

Together with $9.1 million previously spent on the new car park, this new investment brings the total commitment at Sutherland Hospital to $153.5 million since 2014.

Work on the eight new operating theatres will commence in 2020-21, with the project scheduled to be completed in 2022-23.

💉 The NSW Government is extending free flu shots at GPs and pharmacists for NSW residents until 17 July.
🤒 More than 1,000 people presented to our emergency departments with flu-like illness last week. Around 165, including very young children, were so unwell they were admitted to hospital.
... See MoreSee Less

Wanda members thank you for your continued support ❤️💙

Thank you Mark Speakman for your outstanding support of our local community and of surf life saving. 👏👏👏🇦🇺

Our iconic local surf clubs donate tens of thousands of hours each year to patrolling the beach to keep us safe, educating our kids on water safety and promoting healthy, active lifestyles for so many. It’s important that the clubs have the modern facilities they need to do this work.

It is an honor to receive such a grant that allows us to upgrade our facilities and help our volunteers keep our wonderful community safe! 💙💛

WHEN is someone in State Parliament going to “WAKE UP”and let these clubs trade as Licenced Premises exactly as they do in QLD and pay for themselves and be self sufficient !!!! Then there would be no need for government grants and handouts or are ALL of the NSW Parliamentarians in the pockets of the AHA ????

This week’s NSW budget includes:
✅ Record health spending, including more than 10,000 extra full-time staff to hospitals, NSW Ambulance and health services. 👩‍⚕️ 🚑 🏥
✅ More than $7.2 billion in cost-of-living measures, including the new Back to School program. 👨‍🎓 🏀
✅ $16.5 billion over 10 years to break the barriers to opportunity for women and give our children the best start in life, including affordable and accessible childcare and a universal year of prekindergarten before school. 👩 👦
✅ Record $112.7 billion infrastructure program over four years. 🏗 👷🏼
✅ $2.8 billion to help more families find homes, including $729 million for tax reform. 🏡

sir you’ve had eleven years so far… talk with Ambos, cops, nurses and teachers on the work face and you will realise the last decade’s deterioration has caused irreparable damage that no proposal can rectify.

after eleven years in office can you please just update Heathcote Road to a dual carriageway in lieu of a peace meal one lane bridge and token approaches?