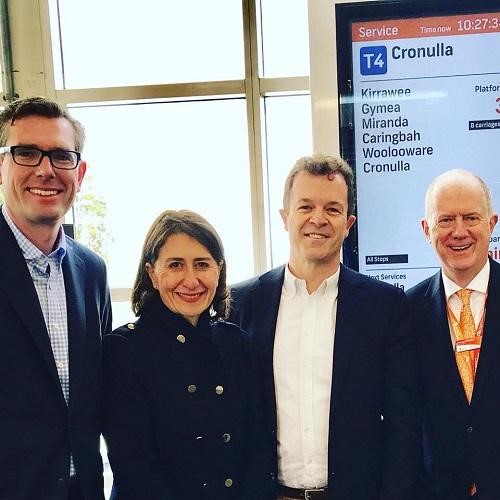 The number of trains which can run during the morning and afternoon peaks on the T4 Illawarra Line and T8 Airport Line will be increased, following the NSW Government’s $880 million investment in technology improvements to modernise the Sydney Trains network.

Five more trains an hour will operate during the peak on the T4 Illawarra Line from Cronulla, which is an increase of up to 30 per cent in capacity.

The T4 Illawarra Line and T8 Airport Line are the first beneficiaries of these signalling upgrades, which will be rolled out across the network – significantly boosting capacity and reliability for all train customers.

These upgrades will be delivered in stages with services coming online progressively from the early 2020s.

The technology improvements will also allow for eight more services an hour on the T8 Airport Line at the International, Domestic, Mascot and Green Square stations, meaning trains at least on average every four minutes instead every six.

Over the next 10 years the T4 and T8 program will deliver:

Since coming to Government the NSW Liberals & Nationals have added an additional 30,000 public transport services.

Cronulla Public School, one of the shire's oldest and most stately, is among those to benefit from an upgrade costing $694,000.

Shire Matters with Mark Speakman: Reopening NSW roadmap offers light at the end of the tunnel

Life at 70 per cent and 80 per cent double-dose vaccination will be a lot different than it is now. Every da...

⚖️Trial by jury is a pillar of our legal system.
⚖️ @NSWDstCt Chief Judge the Hon Derek Price AO has announced the resumption of #COVIDSafe jury trials in Australia's busiest criminal trial court.
⚖️ If you get a juror summons, please answer it.
#doyourpart #auslaw #nswlaw

The #COVID19 #lockdown has been tough on so many, incl. women +children fleeing #domesticviolence, whose abuse may have been exacerbated by restrictions. The lockdown DOES NOT apply if you're escaping #DomesticAbuse.
Call @1800RESPECT (1800 737 732) or the #NSW DV Line for help.

Pop-up, walk-in clinics have begun operating from this week, with priority given to people from vulnerable groups

😊 Here’s a good news story to brighten up your day.
@CaringbahNthPS students had their own "Sculpture by the C" with sculptures out of environmental materials with a “Flying" theme, installed in front yards or windows.
🎥 >450 photos make a short film:
https://www.youtube.com/watch?v=A4G4qyc7C88

💪 Well done #NSW.
💉 Major milestone with 80% of our eligible population now having received their 1st dose of #COVID19 #vaccine.
💉 Pls make sure, if you haven't already, to book in for your 2nd #vax.
#Vaccination is our ticket to freedom.
#LetsDoThis #GetVaccinated

🦠 $320 test and isolate support payments are now available to eligible workers across NSW.
🦠 Details at https://www.service.nsw.gov.au/transaction/apply-test-and-isolate-support-payment

💉 CARINGBAH walk-in #vaccination clinic open 10am-4pm daily until Fri 17 Sept for free #AstraZeneca #COVID19 #vaccine.
💉 No booking or Medicare required. Just walk in, #GetVaxxed + protect yourself, your loved ones + community. Bring a photo ID or Medicare card if you have one.